Eyes on the Street: The Life of Jane Jacobs (Paperback) 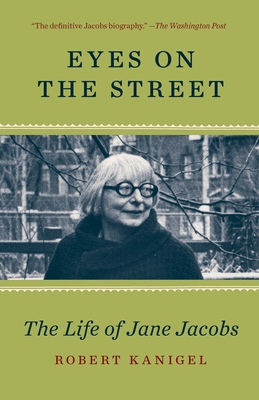 The first major biography of the irrepressible woman who changed the way we view and live in cities, and whose influence is felt to this day.

Jane Jacobs was a phenomenal woman who wrote seven groundbreaking books, saved neighborhoods, stopped expressways, was arrested twice, and engaged in thousands of impassioned debates—all of which she won. Robert Kanigel's revelatory portrait of Jacobs, based on new sources and interviews, brings to life the child who challenged her third-grade teacher; the high school poet; the mother who raised three children; the journalist who honed her skills at Architectural Forum and Fortune before writing her most famous book, The Death and Life of Great American Cities; and the activist who helped lead a successful protest against Robert Moses’s proposed expressway through her beloved Greenwich Village.

ROBERT KANIGEL is the author of seven previous books. He has been the recipient of numerous awards, including a Guggenheim fellowship and the Grady-Stack Award for science writing. His book The Man Who Knew Infinity was a finalist for the National Book Critics Circle Award and the Los Angeles Times Book Prize. For twelve years he was a professor of science writing at M.I.T. He and his wife now live in Baltimore, Maryland, and he writes full time.

“A powerful and all too rare biography of the making of a female public intellectual. . . . Thrilling.”—Fresh Air (NPR)

“Kanigel has written the definitive Jacobs biography . . . in prose that is as lively as her own.” —The Washington Post

“A portrait emerges of an independent heroine who stepped into an arena dominated by men. She was Betty Friedan, Rachel Carson, and Erin Brockovich all rolled into one.” —Boston Globe

“[Kanigel delivers] fast-paced and nuanced storytelling in a crisp prose style that engages the reader. . . . This most complete biography of Jane Jacobs to date is a treat to read.” —The New York Journal of Books

“Zestfully illuminating and entertaining . . . Kanigel’s delight in his subject . . . shimmers on every page.” —Booklist (starred review)

“[Jane Jacobs] was great, and Kanigel gives her the great biography she deserves.” —Edward Glaeser, The American Scholar